Entering His Courts with Praise – My Journey

I just love it when any event involves a group of women getting together. Put Jesus at the centre of it and it makes the perfect combination. When Hazel approached me to be part of the core team of ‘Enter His Courts’ ladies day, I was uncertain. I had been feeling really disconnected from God, an apathy and lacking the passion to connect with Him. I doubted if I was in the right place to be involved.

At the first meeting, we prayed about the theme and for the ladies we wanted to invite. The theme touched my heart and I could hear Him gently whispering to me to enter His courts. “Come my precious daughter, come and be with Me”. I realised He wasn’t disconnected from me but there were barriers of pain and fear that were stopping Me from coming to Him.

Hazel asked us to think about what we wanted to contribute. Something had been stirring in me since I heard a testimony about gifting. God whispered “Dance with Me”. This was a challenge as my dancing had been about constant comparison, never feeling good enough, criticism, and from a very young age horrendous stage fright that would have me shake uncontrollably and then despise myself afterwards.

I had a relatively short but successful career as a dance teacher. I loved giving confidence to children where I lacked so much. However personally and emotionally I was a mess. I never completed my training and when I got married, I stopped and I felt relieved. For money reasons five years ago I went back to it. I completed a very gruelling year of training to get back in shape in order to get my teaching exams.  This was following three miscarriages and a traumatic pregnancy. I stepped back into an environment where I hadn’t healed and looking back it wasn’t God’s will. It ended by becoming bed-bound and relying on everybody for help. I felt God had permanently shut the door on dancing. 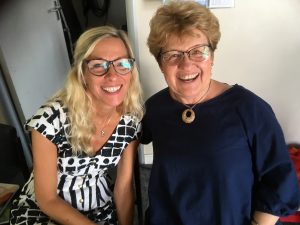 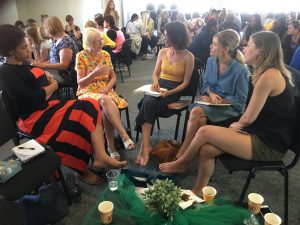 Slowly God filled the loss with joy. I realised that my identity is not in my dancing. When it was taken away I found a new identity, one that is found in Christ alone. In this time I have had several words about my dancing. Even at Jump in just the week before it was mentioned again. Even at that point I didn’t see it as I would literally be dancing again.

Slowly God filled the loss with joy. I realised that my identity is not in my dancing.

Hazel suggested I dance in the Spirit if I felt God ask me too. The thought of doing something unprepared and spontaneous made me feel sick. She reminded me that there was no pressure, I hadn’t committed to anything and I wasn’t letting anybody down. I knew that if God wanted me to do it then He would have to give me the courage and strength to move. In my own strength I wouldn’t have the guts to stand up and do it.

During worship my heart was racing the whole time. I felt like I was standing on the edge of a mountain and knowing that He wanted me to take a leap. I was absolutely terrified. The first couple of steps I could barely breathe. Once I did I realised it wasn’t fear… it was adrenaline. I was worshipping Him with everything I had, marching into battle for Him, following Him wherever He asked me to go. It was all for Him! 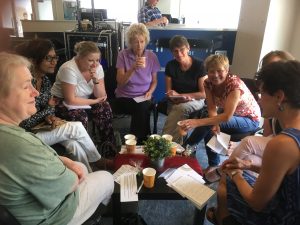 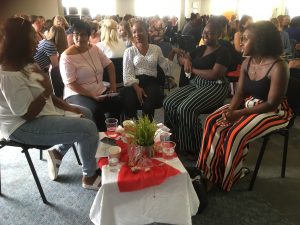 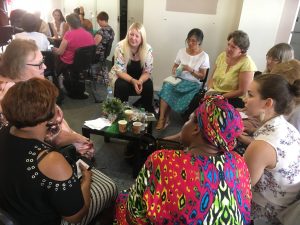 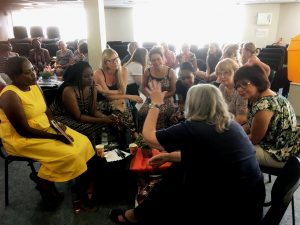 Afterwards I just felt how proud of me He was. No critism, no comparison, no regret, Just joy. That was the ultimate blessing. So when people started approaching me I could not believe the impact it had had on them. He took my sacrifice, my willingness to obey Him and it didn’t just bless me. Ladies came up to me saying it shifted something in the Spirit, it changed how they were feeling, it made them worship Him more, it encouraged them to lay down their fears. He gave me a gift to give to others.

For the day God gave me a picture of a beautiful doorway and behind this doorway was His courts. The doorway had been barricaded up to the top. You couldn’t climb over it but He was inviting us to enter and be with Him. To enter we needed to smash through them. Smash through insecurities, comparisons, deep fears, lies, the things that stop us in life, stop us from living our God-given destiny.

I stepped forward and I smashed mine to pieces and throughout the day I saw one lady after another smash through their barricades whether it be by coming forward to wash their hands, standing up and receiving prayer or talking to somebody that they’ve not talked to before. Victory was had by so many beautiful ladies and each one standing and glorifying His name! A day I shall never forget.

– An article by Deb Jensen