Jump In Weekend Away

After 18 months of planning and preparation, the church weekend arrived with the theme ‘I hear the sound of the abundance of rain.’ In my mind, I was instantly thrown back to the last time Jubilee had its weekend away here in 2004 when I met the amazing Brookchild family for the very first time.

In the middle of an outstanding English summer and England doing well in the World Cup (Belgium too, of course), we arrived on a late Friday afternoon at the Ashburnham estate, nestled in a beautiful part of the East Sussex countryside.

We enjoyed a ‘getting to know you time’ standing in circles on the main croquet lawn before retiring to the bonfire area for outsize marshmallows roasted on twigs, chatting in groups around the warm embers until the sun finally faded and darkness took over. My enduring memories are groups of children talking on the field, the middle aged men’s group reminiscing with one another, and Jonathan Harrison eating more marshmallows than anyone else.

Once we had consumed our hearty breakfasts, we gathered for a short Saturday morning session to hear three of the eldership couples share honestly about their recent journey in the areas of ‘Conformed to Christ’, ‘Compelled by Love’, and ‘Changing our World.’ Josh Afriyie joined the Habitation youth in the Dairy sharing about his experiences being filled with the Holy Spirit.

After morning tea and cake, Ben and Kaat placed us in 5 big groups for the ‘Big Activity’. Designed for all ages, each team competed in a mental challenge, a sound challenge and a large scale ‘Capture the inflatable mascot’ challenge on the lawn in front of the ornamental lake. Sweat was pouring off the runners who were in danger of overheating until a time out provided a welcome cooling off time in the paddling pools. 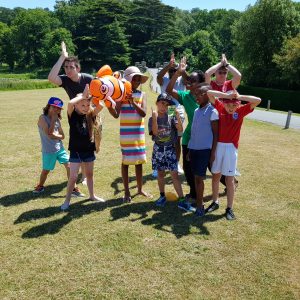 Everyone made full use of afternoon free time around the grounds. A large group arrived at the swimming area for an extra special session in the lake. Various groups managed to climb onto the floating pontoon, some of us resembling seals starring in a David Attenborough nature programme. A number of the younger children showed off their swimming skills, often flanked by the courageous ‘Guardian of the Lake’ Mark Franks. As the group holding a baptismal arrived, the remaining swimmers reluctantly left the lake to dry off for our evening meal. Tim Price deflated his paddle board after offering an ‘aqua taxi’ service to several young passengers. 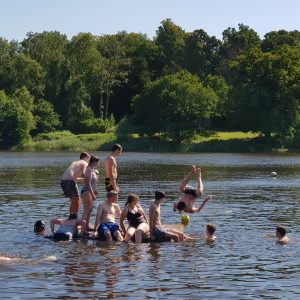 The evening worship session was electric and powerful led capably by Steve and the worship team – what a volume of singing from the body!

Alex and Dorcas, long-term friends of Jubilee from London Network Church, spoke passionately with anointing with the message ‘Resting brings Acceleration’. The sense of God’s presence continued as we prayed for varying age groups starting with the children. 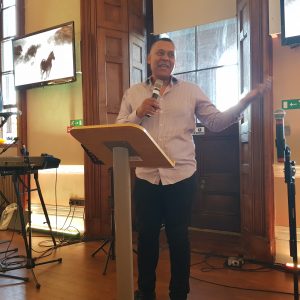 Many continued to chat late into the night and play card games until tiredness won and we all retired (apart from reports of a select group who conversed on the lawn until 3am!)

Waking up Sunday morning, the fantastic weather continued and everyone was in a holiday mood. We met in the main hall for testimonies and a beautiful dance performed by the mother and daughter Coltart combo. Chloe and Molly brought tears to the eyes of many with their graceful and anointed moves. Hazel brought a challenge from the garden of Eden of ‘Where are You?’ before Ruth shared her vision of wooden tent pegs providing a ‘Stake in the Ground’ for the new building at Langley Park/Parkwood. Looking at the Bible passages of 1 Chronicles 4:9-10 (prayer of Jabez), Proverbs 22:28 (do not move the boundary marker) and Isaiah 54:2-3 (enlarge the place of your tent), we received the encouragement to write our name and a scripture on the tent peg in recognition of the land the Lord has given us. We will meet for a BBQ at the new building on Thursday 19 July where we can drive our pegs into the ground as part of what the Lord is doing in Jubilee.

What a weekend. What a sense of new identity and moving forward in the purposes of God. What a privilege to draw on the richness of our past journey and embrace the newness of the way ahead.

The hot weather may continue, England (or Belgium) may (or may not) win the World Cup, BUT Jesus Christ is the same yesterday, today and forever, AND He will lead us into green pastures and blessing. Let us embrace this period of acceleration from a place of His rest.

Thanks to everyone who contributed to making the weekend very special.